Hello Wiki-Webtender friend, help me out.  Sources say this drink is “an IBA Official Cocktail.”  The IBA…that sounds important. [apparently, I have alot to learn before embarking on my alternative career].  The IBA is the International Bartenders Association, and the Bacardi Cocktail is “one of many cocktails selected by the IBA for use in the annual World Cocktail Competition in bartending.”

The Bacardi Cocktail has been around in some iteration or another since the early 1900’s.  In the late 1930’s a New York appellate court ruled that to be called the Bacardi cocktail required the use of only Bacardi brand rum.  Use something other than Bacardi, call your cocktail by another name.

The basic mix for the Bacardi is rum, lemon or lime juice and grenadine.

Fun DrinkScience Fact (I’ll do the research so you can impress your friends at your next cocktail party):

Let’s take a moment to talk about Grenadine.  Grenadine was originally made with pomegranate juice and sugar.  In fact, grenadine is derived from the French word ‘grenade’ meaning pomegranate. Pomegranates have had an illustrious place in history and were mentioned during Homer’s waxing poetic about Aphrodite in the 7th Century BC.

In addition to being a necessary and tasty ingredient in many cocktails, Grenadine is good for you!  Pomegranates are absolutely brimming with antioxidants or polyphenols, such as tannins (drink more wine, people!) and catechins.

Know Your Phenolics by Washington State Viticulture and Enology Group is a site that contains more information about antioxidants than you would ever want to know.  Basically, our bodies are in a constant battle with a nasty little type of molecule called a free radical.  You might think that a name containing “free” would be indicative of something positive, but not in this case.  Free radicals contain an unpaired electron making them highly reactive and thus cause damage to our DNA, proteins, and cells.  Research has shown that free radicals can cause both cancer and heart disease.  Antioxidants (drink more grenadine cocktails, people!) mitigate the damage caused by free radicals by donating an extra electron to the free radical.  No longer “free” the molecule is now harmless and cannot cause continuing cellular damage.  However, antioxidants are only good for one electron-donating-reaction.  Basically, antioxidants are single-use, which is why we are told to eat (and drink) a diet rich in antioxidants.  This concludes today’s nutrition lesson.  Back to Grenadine……

We’ve all seen that bottle of ACME red liquid next to the Angostura bitters on the shelf in the grocery store.  The ACME red liquid is high fructose corn syrup and disodium 6-hydroxy-5-((2-methoxy-5-methyl-4-sulfophenyl)azo)-2-naphthalenesulfonate (affectionately known as FD&C 40).  I would suggest that you not buy this product.  Instead, make your own.

There are many recipes for house-grenadine.  I use the recipe from Imbibe with slight variations. 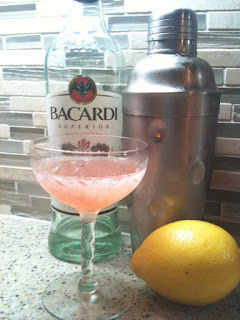